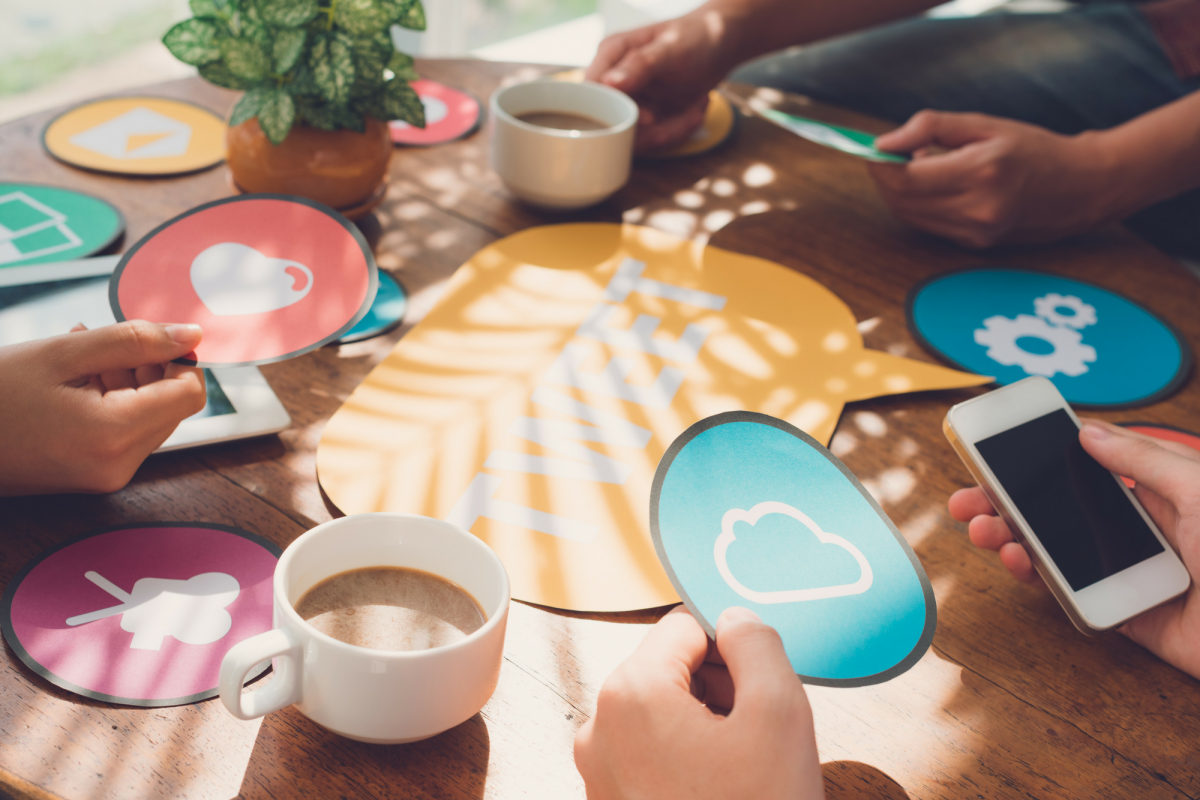 Every second, around 6000 tweets are tweeted on Twitter. In a world of information overload and shrinking attention spans, organisations are constantly challenged to come up with unique, competitive ways to capture their customers’ attention. And your NGO is not only competing for donors’ funding, but also trying to raise awareness about crucial global issues affecting humanity and the planet. So as a nonprofit marketer you must find ways to cut through the clutter and get that message across. To help you in this endeavour, I have put together 11 strategies that will increase your chance of amplifying your message and driving more impact – backed by science, experience and creative thinking.

1. Have a clear goal

Before you write your tweet, make sure to have a clear goal in mind. The goal should be more than ‘I need to quickly send out this tweet before moving on to my next task’. If your organisation has a social media strategy, think of your organisational objectives. And even if you haven’t written out your strategy yet, you are using social media for a reason. What do you want to achieve by sending out those tweets? Who do you want to reach? This might sound like a time-consuming process; but especially because of time limitations, you want your tweets to be spot-on. Goals could include:

• Raising awareness about an issue.
• Triggering action regarding a cause (eg raising money, gathering signatures for a petition).
• Showcasing your impact to your donors and thus, increasing engagement.
• Highlighting your expertise around a certain topic to boost your thought leadership.

As Turkish novelist Elif Shafak puts it, stories ‘let us leap over cultural walls, embrace different experiences, feel what others feel’. And although a tweet has to be short, it can definitely tell a powerful story. Through the right words, the right visuals and the basic storytelling structure, a tweet can conjure up strong emotions. A simplified storytelling structure for a tweet consists of the following:

1. Current context: the problem
2. Solution to the problem
3. Impact generated by the solution
4. Call to action

Studies have shown that the brain processes images 60,000 times faster than it does text. So the ‘story’ tweets mentioned above will get an enormous boost if complemented by the right imagery. According to Buffer, tweets with images get 150% more retweets and 18% more clicks than those without. And Hubspot’s A/B testing tells us that they get 55% more leads. If this is not convincing enough, compare these two tweets:

Which one triggers more attention? The answer is obvious.

And now think of the power of a GIF. With GIFs, you can creatively mix visuals from your most inspiring projects, animate your infographics, give an exciting sneak peek into your latest publication (you name it!) and ultimately stand out more, evoke more emotion and have more impact. Since the introduction of the functionality in 2014, GIFs have been all the rage on Twitter. In 2015 only, users shared more than 100 million GIFs. If you haven’t used GIFs yet, it’s time to get on board.

So go ahead and show the world:

• Images from your programmes to give a glimpse of the context and the impact your organisation is making.
• Collages of people whose lives were impacted by your projects, together with their quotes.
• Infographics based on your studies or on curated content.
• Pictures from events (eg local campaigns; people running at your charity marathon; your experts showing an inspiring slide at a conference; people interacting during one of your conferences etc).
• Glimpses of your latest publications.
• Step by step construction of a home/school/water pipe/solar panel/toilet/cook stove; people working on a project.
• Quotes of end-users, donors, volunteers, members, speakers.

Make sure to organise regular brainstorms to get the creative juices flowing.

4. Enjoy the power of video

If photos can amplify your content to that extent, just hear what videos can do. According to AdWeek’s infographic, videos are six times more likely to be retweeted than photos and three times more likely to receive retweets than GIFs. What’s also interesting is that 48% of the videos watched until the end tend to follow the storytelling structure mentioned above: a problem that is in the end solved.

So take all those videos you’re proud of (maybe add a text overlay for people watching with the sound off) and showcase them directly on Twitter. And if you’d like to only highlight a certain part and make your video snappy and punchy, Twitter offers you the functionality to select a certain time frame.

One more thing! Live video is all the rage now on Twitter. And it seems that Twitter videos around live events increase brand favourability by 63%. So why not give your NGO that extra edge?

Here are some ideas of videos for your NGO:

• A sneak peek into one of your projects, highlighting the problem, solutions and impact.
• Testimonials of people who’ve been impacted by one of your projects.
• Time lapse of something being built (home, school, water pipe, solar panel, toilet, cook stove) or prepared for an event (booth being constructed, signage being hung around the venue).
• Live video from one of your events (a plenary, panel discussion, behind the scenes, marathon, dance, local campaign etc).
• Live video from an important conference.
• Animations explaining how your NGO can address some of the global issues (remember the storytelling structure!).
• An animation explaining a global issue ending with a call to action.

Here’s an example from SNV:

How dairy farmers in Uganda are innovating their farming practices to adapt to &mitigate #climatechange. FULL VIDEO: https://t.co/xq5L9UMY7u pic.twitter.com/kZ4oKyrrQr

5. Use facts and figures

According to Kim Garst, “tweets containing numbers get retweeted 17% more often than those without”. As Hubspot, Copyblogger, Kissmetrics and many others explain, ‘the brain loves specificity’ and certainty. We are attracted to numbers because they promise structure, substance, relevance and ease of reading. Here’s the proof: infographics are liked and shared on social media three times more than any other type of content. By using facts and figures, you can effectively raise awareness about a situation and establish credibility. Just make sure you triple check the accuracy of your data before you press tweet.

Note: If you’re looking for facts and figures for your international development organisation, check out UN’s Sustainable Development Goals website.

6. Use links and hashtags

According to Buffer, tweets that include links are 86% more likely to be retweeted. Plus, tweets with hashtags get twice more engagement. However, don’t overload your tweets with hashtags; one or two will get you 21% more engagement than if you add three or more. In addition, research shows that placing the link 90% of the way through your tweet increases the retweet rate.

Is there an important event coming up and its theme is relevant to your organisation? Even if you’re not attending, you can still contribute to the online conversation and explain your NGO’s stance on some of the issues discussed. Just be sure to stay away from overly promotional tweets. Valuable content goes a long way in promoting your organisation. Remember to check what the right hashtag is and tag or mention relevant organisations or people.

If you’re working in a nonprofit, you’re there for a cause: fighting poverty, gender equality, universal access to water, education for children everywhere etc. Join the global conversations around international days, have your say on some of the most important issues facing humanity today and show the world how you’re addressing these issues. Make sure to use the right hashtags and tag relevant organisations. Here’s a list of international days observed by the United Nations.

Tagging or mentioning donors and partners will not only increase the chance of your tweet being retweeted but will also boost your relationship on- and offline. Think of your inbound marketing stages: attract, convert, close, delight. How do you delight your donors and partners? Giving them extra visibility will boost the relationship and create a positive dynamic that will extend well into the future.

According to Hubspot, tweeting later in the evenings and at the end of the week will garner more retweets. However, it is important to test what works best for your organisation and remember to cover all the relevant time zones. It is okay to tweet the same tweet several times. Studies show that two identical tweets trigger almost the same engagement.

Capitalise on your other channels to bring more traffic to your Twitter account and increase the likelihood of getting more retweets. Mention your Twitter campaigns, hashtags and handles on your website and other social networks, in your newsletters, marketing collateral, email signatures and in event invitations. Embed a Twitter feed into your website and blog, prepare ready-made tweets for your blog posts, ebooks and newsletters and mention your campaigns in forum conversations.

Want to mobilise support for a campaign and rally people to spread a certain message? Consider using Thunderclap, a ‘crowdspeaking’ platform that “allows a single message to be mass-shared, flash mob-style, so it rises above the noise of your social networks. By boosting the signal at the same time, Thunderclap helps a single person create action and change like never before.”

There are loads of tactics out there to help you amplify your content but in the end, the most important tactic is to understand what your audience wants, tweet valuable content (remember the 80-20 rule!), test, check your analytics and test again. And of course, retweet/quote yourself and people will return the favour.

What other strategies do you use to increase your retweet rate? Share in the comments below.

Looking to better integrate your social media strategy with your fundraising efforts? Get in touch for a consultation.